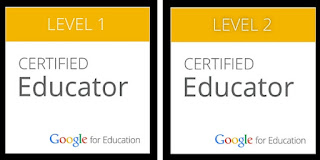 The tests were different than the ones that I took last year as part of the Google Educator certification. They cost less money and were more performance-based (which was a bonus).  The practice scenarios, however, required a lot more focused concentration, because of the level of detail in them.  I struggled at times with cognitive overload, as a result of having to tab between detailed scenarios and the work space itself.  I typically use the Tab Scissors extension when I want to read directions on one screen and follow them on another.  I didn't think to add it in during the tests (which were both taken in incognito mode).

I learned more than I thought I would during the training modules, leading to the obvious conclusion that there are always capabilities being added to Google that are easy to miss.  For example, I learned how to use the Autocrat add-on, which I hadn't used before.  I also learned about the uses of different types of charts in Google Sheets!

Posted by Jill Dawson at 3:20 PM No comments: