After putting the finishing touches on this sound reactive leather skirt (made for my daughter, who may never actually wear it in public), I found myself thinking back to my high school years, hanging out in the discos of Germany! While I wouldn't dare go out in public wearing something like this today, I am amused to no end, imagining how quickly I would have jumped into this skirt back in the 80's!  Forgive this shameless indulgence.


If you want to make your own sound reactive wearable, or see the process I followed to make this, check out the Sound Reactive Equalizer Skirt on Instructables. 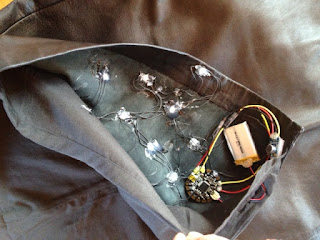 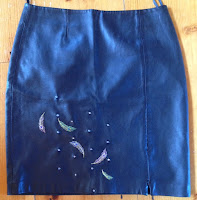 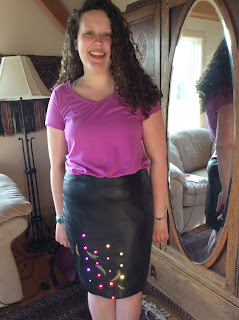 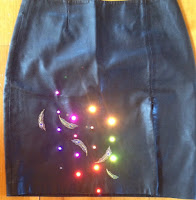 Posted by Jill Dawson at 2:10 PM No comments:

A Few Words on Words

Last night, while reading Bird by Bird, by Anne Lamott, I was struck by something she said about writing being a "desperate endeavor," driven by our deepest needs "to be visible, to be heard...to make sense of our lives, to wake up and grow and belong," to better understand ourselves and connect with others.

In pondering this raw truth, it occurred to me that while I routinely document things I've discovered while playing with tech tools, I don't spend nearly enough time writing about the meat that matters.

One of the triggers that got me thinking about this, was a blog post written by Bonnie Birdsall, referencing the impact of work that I was lucky to have done alongside Doug Dunbebin prior to his untimely passing. Drawing attention to the fact that Doug's legacy lives on through media creation, partly as a result of our collaboration, made me reflect upon the importance of human connection and the intricate web of our interactions and relationships.

I met Doug in July of 2014, while taking Jay Hoffman's powerful course “From Idea to Impact: Harnessing the Power of Video in Your Classroom."  That experience, coupled with my first foray into the Create Make Learn Summer Institute, whet my appetite for digital story-telling and eventually led to my exploration of green screen video production.  After showing Doug some projects I'd been working on, he encouraged me to keep creating and agreed to co-present a workshop at Dynamic Landscapes in 2015.  The workshop was so well-received that we continued our collaboration, and I had the benefit of learning a great deal about myself and the power of words.

When I started working with Doug, I was terrified of presenting to an adult audience.  At one point early on, I made a disparaging comment about something I'd shared while presenting to a small group.  Doug addressed this later, in such a kind and powerful way, that it awakened something in me, fundamentally derailing some old patterns of thinking.  I look back on this conversation with gratitude, and consider the importance of words.

The last time I saw Doug was at the RETN/VCAM producer's party in late January, where I was honored with a Lifelong Learner Award.  Because he'd given me a little advanced warning, I was able to express a few heartfelt words of appreciation to Doug that evening.  I didn't really have much time to fully reflect upon the experience, however, because my father passed away a couple weeks later after a battle with Alzheimer's disease.  My father's loss was followed by Doug's passing three weeks later.

It's taken a while to process these events and begin shaping my thoughts into words, but I think that the heart of the matter is this:  the words we tell others and the words we tell ourselves are powerful.  We cannot underestimate the power of our words to inspire and heal others; but, this can only happen if we share them.
Posted by Jill Dawson at 9:51 AM No comments: