I first experimented with CheerLights a few months ago while attempting to better understand the Internet of Things.  Today, I'm using a Raspberry Pi Zero, rather than a Photon microcontroller. One dazzling detail about CheerLights is that it allows people all over the world to simultaneously synchronize the color of lights. Anyone can change the color of lights connected through the CheerLights API, by sending a tweet that mentions CheerLights, along with the name of a color. 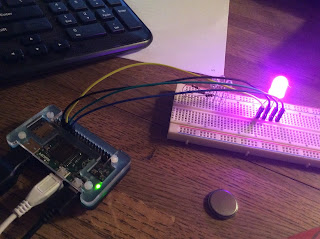 Using this Node-red tutorial from Magpi magazine, I was able to get CheerLights up and running on my Pi with relative ease. In the process, I learned a little bit about Node-red, a graphical interface for interacting with smart objects through the web.  Of note, I used a 10mm RGB LED with a common cathode, rather than the suggested Ledborg or three separate LEDs.


I'm wondering what else might be achieved with Node-red.  The interface is not entirely intuitive, but it seems like it could be useful tool for learning how smart objects talk and interact on the internet.

Posted by Jill Dawson at 7:53 PM No comments: