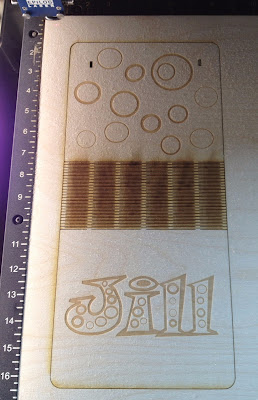 This week at the Burlington Generator, I finally figured out how to use Inkscape's living hinge extension to create a laser cut book cover/ photo album.

+Sarah Sutter taught me how to personalize a font by turning text into editable paths. Using what I learned from her during Create Make Learn 2017, I was able to change the spacing and angles of my letters.  I really like the way they turned out.

+Jean Cherouny graciously helped me figure out how to make some improvements in Adobe Illustrator, teaching me how to use the "shift" key to select and edit individual components.  As a result, I was able to change the line widths on all of my circles, to add a little complexity to my design. 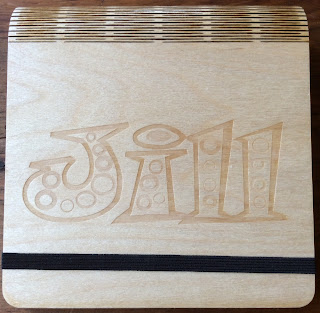 After sanding the plywood, I used a clear layer of polyurethane to add a little shine.


I used my sewing machine to secure the edges of the elastic closure. 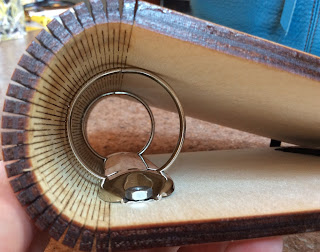 +April Hallock came up with the idea of adding a metal binder mechanism to the cover.  I ended up harvesting one from an old photo album that I found in a box marked "Free" at the Williston Re-Store. 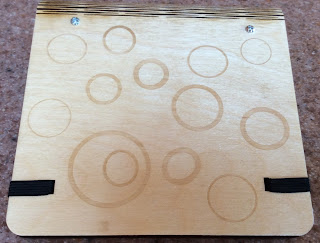 Right now the 2-ring binder mechanism is attached with nuts and bolts.  While I don't love the way that the bolts look on the back side of the cover (partially due to my lopsided drilling), I'm not yet sure how to add recesses for the bolts; that's something I'm hoping to learn.

Next time, I want to make a book with a smaller, thinner cover and a narrower spine.  In a revised iteration, I plan to add a flat spine with holes for a binding, sandwiched between two living hinges.
Posted by Jill Dawson at 2:50 PM