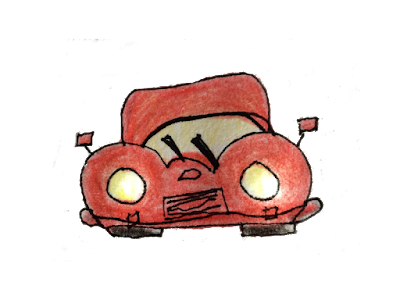 Here's How I Did It:
This video is an app smash of iMovie, DoInk Greenscreen, and DoInk Drawing and Animation. I started by recording footage of a drawing of two cars in the middle of a road, with blinking headlights powered by a paper circuit.  I imported this clip into the DoInk Greenscreen app.  Next, I took a photo of the drawing and used Pixlr photo editer to remove the background from one of the cars, saving it as a transparent PNG file.  I imported the PNG file into the DoInk Drawing and Animation app and created a new composition, making the photograph appear to move.  I added the text by creating another animation.  I imported these compositions as new layers within the Greenscreen app, uploaded the final video to camera roll, and added audio within iMovie.
Posted by Jill Dawson at 11:06 PM