Video Tutorial: How to Program an ATtiny85 with Codebender and a Chromebook 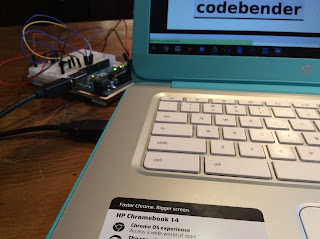 Several educators have asked me about paper circuitry and expressed interest in the idea of having their students code microprocessors for notebook hacking projects. After several days of work, I've finally completed the video tutorial that I've been promising.  In the process, I learned more than I expected.  For example, Codebender recently changed some aspects of its set-up, making it somewhat difficult to find the option to select a programmer.  I also learned that Codebender will soon be compatible with Chrome and the TinyAVR programmer from Spark Fun; it is already compatible with Firefox.

Update:  As of January 2016, Chrome is compatible with the TinyAVR Programmer!

The video below is best viewed in high definition.